Our offsprings always tend to leave us speechless, but imagine your 4-year-old son coming back home with a baby deer as a companion. Isn’t that something of a fairytale? Well, that exactly the kind of sight Stephanie Brown had while on holiday at Massanutten Resort in Virginia.

Stephanie Brown Stephanie couldn’t believed her eyes when she opened the door and saw her 4-year-old son, Dominic alongside a baby deer on the porch. Naturally, the woman got stunned upon the Disney-like sight, but she managed to grab a few photos of the adorable moment.

Needless to say the lovely snaps went absolutely viral soon after Stephanie shared them on Facebook. After all you don’t see a 4-year-old and a wild deer hanging around everyday. The mother explained they were about about to leave the resort and while she was packing,

Dominic was playing outside the cabin. It’s unclear though how the duo ended up together. 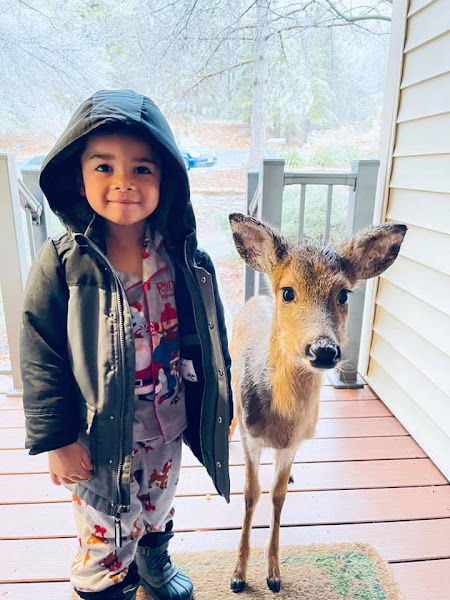 Either the fawn was attracted by Dominic’s pyjamas or he may offered her some snacks, one thing’s for sure they instantly befriended each other.

Since Dominic wanted to introduce his new buddy to his mom, they both showed up at the door to the surprise of the boy’s mom. “I was in shock. I was like, ‘No way. My mind is playing games with me’,” Stephanie told ABC. “It wasn’t like anything strange for him, it was so weird. They were just in sync.” What quite incredible is the way the fawn acted. She doesn’t seem scared or uncomfortable in the presence of humans or the camera, not even for a second. The was she poses for the camera give the impression she’s actually acting. Dominic even gave his new friend a name. He called the baby deer Flash, after the super-hero from the DC Comics. Once Stephanie shared the lovely snap on Facebook, thousands of reactions and comments started to shower.

“They both look like this is an everyday occurrence for them. So precious, both of them,” one person wrote.