Stray dogs wanted to be adopted. They always want love and care that is missing in their life. Sometimes lady luck smiles on them and they are able to find a forever home.

Like for this pup, his destiny changed as he took full advantage of the opportunity given to her. She noticed a car with an opened door and she jumped in straight away.

The owners of the car Bill Shaver and his wife were returning to their home in Missouri after a fishing trip in Arkansas. It is when the couple stopped the car at a gas station on their way, the couple met the sweetest dog.

Bill got off his car in a hurry to use the washroom and forgot to close the door behind. A stray dog noticed the open door and jumped into the car. 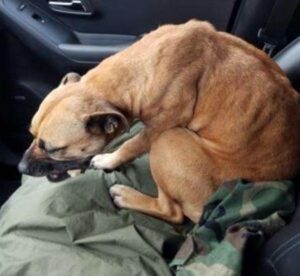 When the couple came back to their car, they could not believe their eyes. The dog curled in the front seat and she behaved like she was familiar with the car earlier. So it was clear that the poor pup was asking for help from them. She was very weak and hungry. 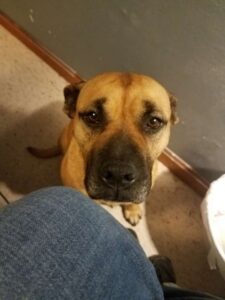 The couple was taken over by pity and compassion and decided to take the dog along with them. So all three of them started their journey back home.

As they reached home, Bill took her inside the house in order to make her more comfortable. They already were proud parents of four rescued- three dogs and a cat. All of them were very excited to meet their newest member.

They named the dog, River and decided to give her a bath as she was covered in mud. It seemed that she took the bath the first time. The river was so happy that at last, she got a forever home.

We are happy and impressed by the family as they randomly decided to adopt a stray dog.