Baby deer rescue and release: The baby deer was healed and released back to her real mother. Lithuanian outdoorsman Darius Sasnauskas had a chance to witness a birth of two baby deer in his backyard near the Yellowstone National Park in the US. Unfortunately, one of them was injured and soon left behind by her family because she couldn’t keep up with them.

“With so many predators around, she had no chance to survive on her own,” Darius writes in his video caption. He decided to bring her home. “I do not support keeping wild animals as pets, but this was a special situation,” he writes. After a lot of hard work, the baby deer was healthy again and it was time to set her free.

However, the bond between her and Darius was so strong, that she kept coming back to him. 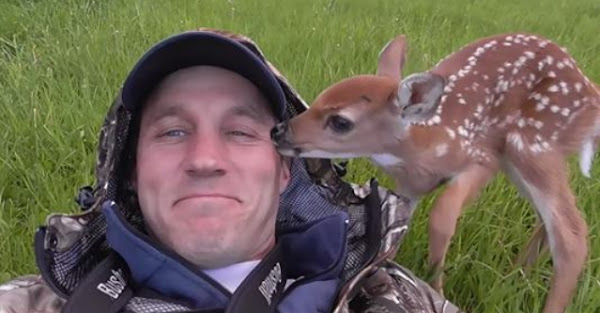 Nevertheless, one very special evening she finally reunited with her family.

Darius witnessed a birth of 2 baby deer in his backyard, but unfortunately, one of them had an injured leg She couldn’t keep up with her family and was left behind – her mother never came back

“I do not support keeping wild animals as a pets,” Darius wrote in the video’s caption. “But this was a special situation.”

“With so many predators around, she had no chance to survive on her own,” said Darius Darius fed her every 4 hours and his dog repeatedly licked the fawn’s face Soon the baby deer learned to walk again

“She’s already used to me, and she follows me…but nobody can replace her real mom” Darius tried to release her back to the wild many times, but she always returned to him Finally, one evening the mom showed up and the baby deer rejoined her family.