Robin Strader, from Norman, Oklahoma was on her way to work, when spotted something really unusual in the middle of the busy highway she was driving on. A scared donkey was meandering along the road way. The woman immediately pulled over her car and jumped to help the scared creature, but not before to call the authorities.

Shortly after, officer Kyle Canaan at Norman Police Department, arrived at the scene. Meantime, Robin somehow managed to get the donkey off the road. Initially officer Canaan was not sure how to deal with this completely unusual challenge, but he soon figured out.

The woman offered to foster the donkey they named Squishy at her home, a few miles away from there. But since it would have taken too long for a proper transportation vehicle to arrive, officer Canaan decide to give Squishy a drive-along. An invitation that Squishy gladly accepted. “Our officers encounter unexpected things every day while on-duty,” the City of Norman, OK Police Department wrote on Facebook. 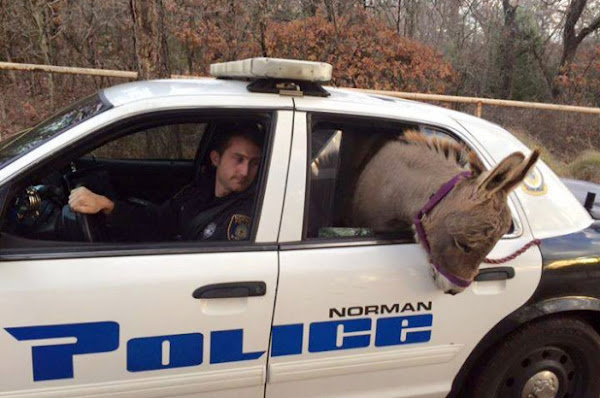 “This morning, Officer Kyle Canaan responded to a call regarding a donkey on the loose in the 8100 block of 120th Avenue NE. To ensure the safety of the animal, he helped transport the donkey to a nearby home for safe-keeping until its owner could be located. It’s not everyday that you see a donkey in the backseat of a police car!”

The rescue donkey wasn’t bothered at all to ride in the back of the patrol car, a space usually reserved for outlaws. More than that the two got along very well and they even had a lot of fun on their way. Well, except for one thing.