Rescuer, LaChrystal Ricke, is the founder and director of Reggie’s Friends, a rescue group in Houston Texas. She saw a heartbreaking photo of a dog sleeping outside on a dirty armchair. She went to go pick him up immediately.

“He was out in a parking lot in this kind of not-so-nice part of town,” Ricke told The Dodo. “Somebody had posted that they’d gone to the gas station and there was this skinny dog. I wanted to pick him up because it wasn’t a safe place.”

By the time Ricke reached the gas station, the sun went down. It was dark and in an unsafe part of town, Ricke was on high alert– but she refused to leave without the dog that needed her help but he was nowhere to be found. Ricke even gave him a name: Aniken. Ricke posted a plea to Facebook.

“I put up on the thread, ‘Hey guys, can you come out here? I can’t find him. I’m going to leave him be for the night because I’m sure he found his safe spot.” 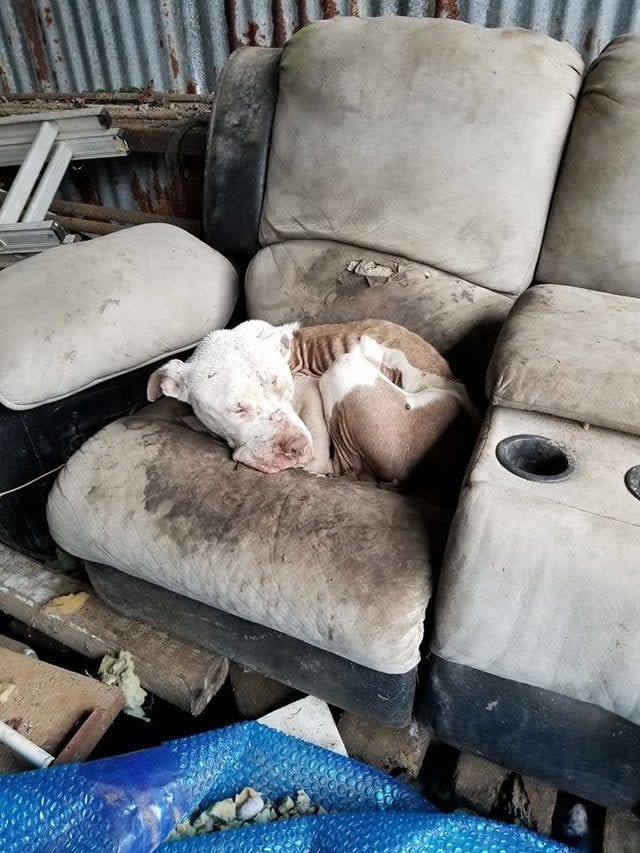 The next morning, two volunteers went back to find him. “They started knocking on doors, asking people if they’d seen him,” Ricke said. “But nobody’s seen him, nobody’s seen him. And then this little healthy female [street dog] popped up — we named her Tessa. She’s trying to get their attention, and leading them back to this little shack in the back where people have dumped all sorts of garbage — there’s car parts, there’s food garbage.” 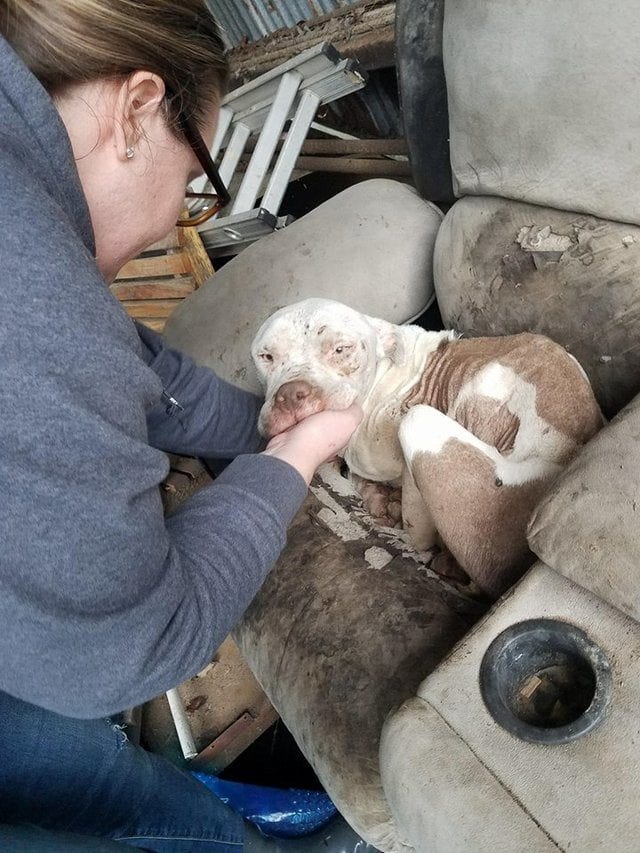 Ricke met the other volunteers at the gas station. She was thrilled to see Aniken and they decided to bring him back to the rescue center along with Tessa. On first glance, they all thought Aniken was just a “malnourished street dog” but his situation was actually a lot worse. 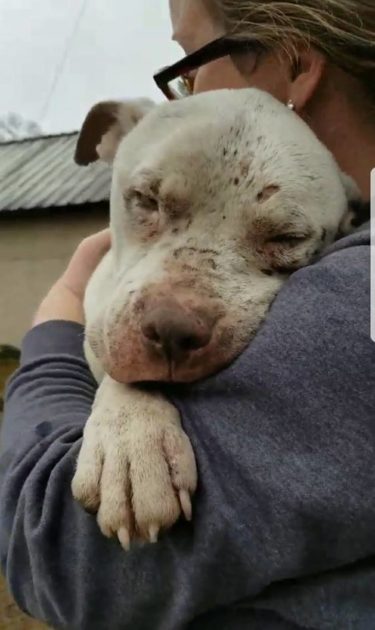 “We get home and he starts coming out of the crate, and we start seeing these massive infected wounds,” Ricke said. “And they’re oozing — they’re still infected. My husband and I were like, ‘OK, we need to get him straight to the emergency vet.’”

Once he arrived at BluePearl Emergency Pet Hospital, they found even more issues with Aniken. He was covered in ticks that had fed to full capacity. This had put an enormous strain on his organs. The medical team was also concerned with something else: Aniken was used as a bait dog. In fact, his case was the worst they had ever seen! The poor dog was pretty much used for target practice.

At first, Ricke wasn’t convinced this was true. She claims that that term is thrown around too often but when the vet opened his mouth and showed her that practically all his teeth had been pulled so he couldn’t bite back, she knew right there and then that this poor dog was a victim in more ways that one. 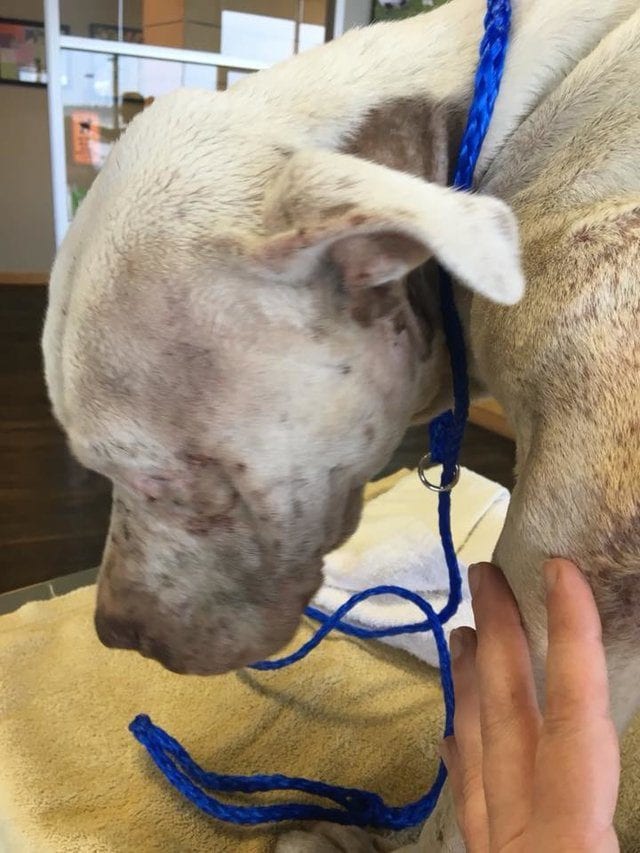 Aniken has scars on top of scar, on top of wounds that wouldn’t heal. The tick infestation made matters worse. He wasn’t clotting properly and wounds that should be healing were badly infected.

“All of these wounds that were oozing, they were oozing because somebody had sewn them up by hand,” Then you take into account all the scars on his face, and you start putting it all together, and there’s no other answer — this was his life. He was a bait dog. The intent was for him not to live basically, which is horrifying.” 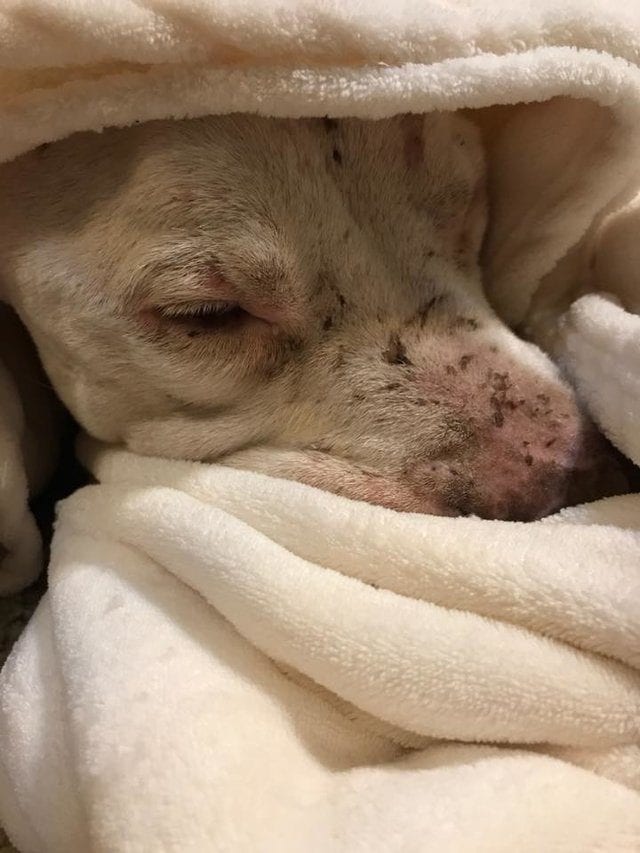 Aniken had a long road ahead of him. Because he had to stay at the medical center, one of the nurses there wanted him to feel as safe as possible so she gave him a stuffed elephant to keep him company. 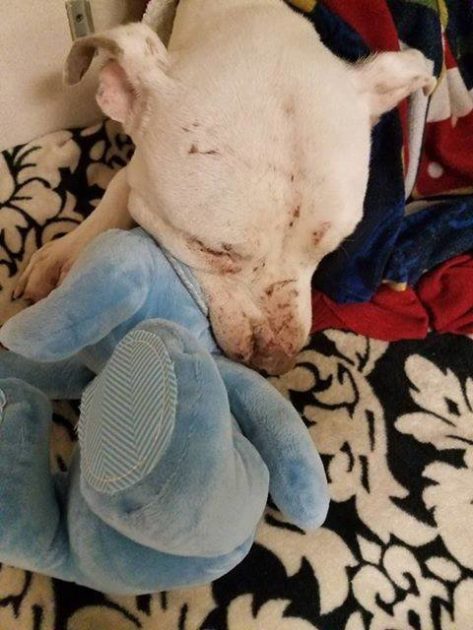 A dog that had nothing, that had been tortured and then discarded, finally had a safe space and a plushy to keep him company. Aniken was by no means healed but he understood that this stuffed elephant meant he could start to form connections– and that his mean life would forever stay behind him. 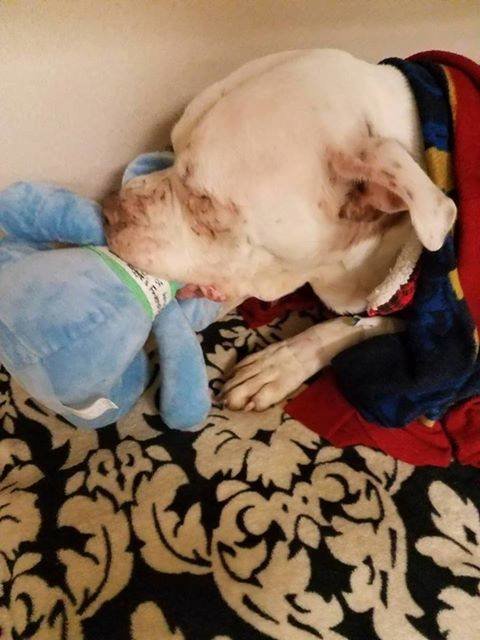 As Aniken began to heal, he made his way to a foster home. And guess who came along with him! Yup, his stuffed elephant. 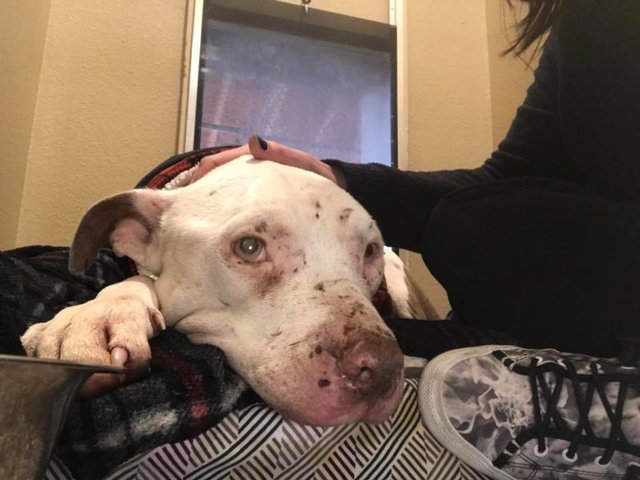 Nothing would be fair or easy for Aniken. No one can tell for sure what dogs remember or what they put behind them for good. But what was certain was that Aniken’s days on filthy armchairs behind gas stations were over. Days being used as a bait dog were over. Days being abused and dumped and never loved were over.