For one German Shephard named Herschel, the love he now receives is truly a blessing. During the first couple years of his life, Herschel spent much of his time chained to a post. But after Herschel’s appearance on Rocky Kanaka’s show Dog’s Day Out in 2018 — in which the happy dog got to eat tasty treats and see the ocean for the first time — Herschel found a new family in Washington state.

According to Rocky Kanaka’s video feature on Herschel, the dog spent the first five years of his life neglected and alone, chained up in someone’s backyard. He was given up to the animal shelter not once, but twice, lowering Herschel’s chances of getting adopted even more.

Many thought Herschel would be regarded as unadoptable and be forced to live the rest of his life as a ward of the shelter. It was also possible that Herschel would be denied the chance to enjoy a life of longevity. Fortunately, Herschel found another family willing to give him a chance. Rocky was aided by Save Our Shelter and the Dog’s Day Out show hosted by Rocky Kanaka. 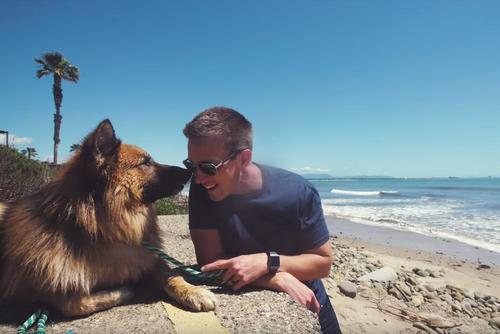 The show provided Herschel with the opportunity to see snow for the very first time, as you’ll see in the video. But what really caught the eye of viewers was Herschel’s reaction to his first visit to the beach. When Herschel approached the water for the first time he alternated between barking and whimpering. It was obvious the dog was both excited and confused. 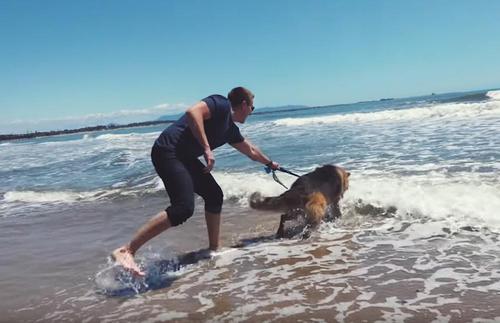 Rocky was hesitant to allow Herschel to run off to play in the water. The dog had spent much of his life in chains and Rocky was not sure of how the dog would respond to the water.

Rocky held onto Herschel while the dog got sand in his paws. He then allowed the dog to wash the sand away as the waves came to shore. The playful howl that came from Herschel will remind everyone of their first day at the beach.

Herschel tried to bite the waves. He was unsure what to do with the happy feelings he was experiencing for the first time. The news gets better for Herschel. His time on the show caused a new family to develop an interest in bringing the dog home.