Almost as if she is saying “Don’t talk to strangers”. Baby elephants are nothing if not curious. They’re either trying to figure out why they can’t squeeze themselves into their old bathtubs, refusing to leave their favorite mud spot, or trying to determine why they have such a long nose.

So, when the baby elephant in the video below discovered some tourists, it wanted to investigate. The mother, though, was having none of that. The protective mama elephant quickly pulled her baby away from the tourists. As the park wrote beneath the video, it’s “almost as if she is saying,

‘Don’t talk to strangers.'” The curious baby was excited to see the tourists, but ultimately followed his mom — after all, mom always knows best. Nice job of parenting there. 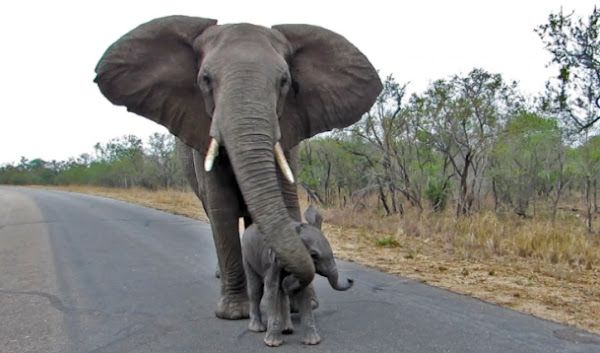 The mom didn’t make a big deal out of it—she wasn’t being a hero—but she calmly and effectively redirected her child’s attention elsewhere to steer it potentially out of danger. Now the baby elephant can go back to doing what it does best—playing with birds. Kruger National Park, in northeastern South Africa, is one of Africa’s largest reserves.

Its high density of wild animals includes the Big 5: lions, leopards, rhinos, elephants and buffalos. Hundreds of other mammals make their home here, as do diverse bird species such as vultures, eagles and storks.