A dog missing for nearly a month in the Australian bush was found by a family out for a walk and returned to her grateful owner. The family was visiting Mt. Glorious National Park near Brisbane in Queensland, Australia when they noticed an animal along a creek.

“My husband and I took my dad to see some rock pools in a fairly secluded section of Mt Glorious National Park. As we walked along the creek bed, we noticed a disturbance in one of the deep pools ahead, Imgurian dangerm0use writes. “Thinking it might be a roo or a platypus, we approached quietly, only to see this forlorn little face looking back. It was honestly the saddest sight.” 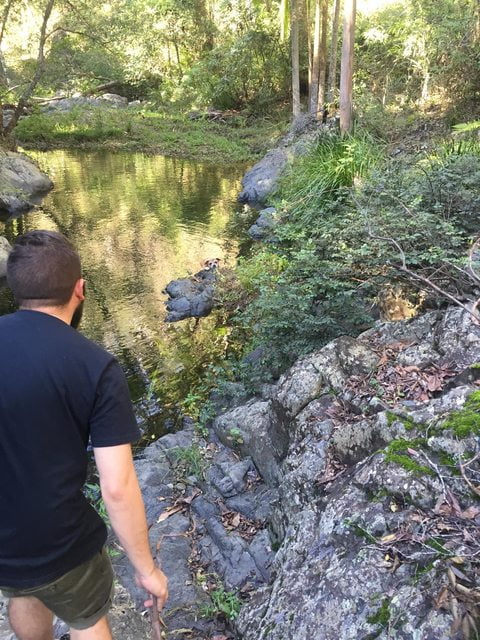 “We approached cautiously, not knowing whether this was a domesticated or wild dog. Either way, we couldn’t leave it there in the freezing water. It was completely exhausted from its attempts to struggle out of the deep section it had fallen into, and there’s no way it would’ve survived the night.” 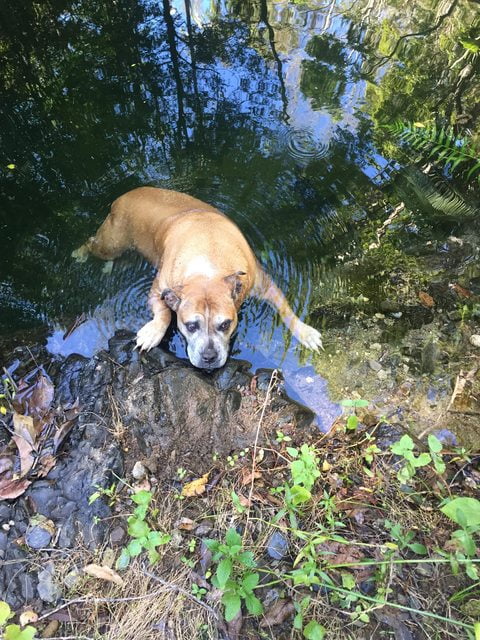 They approached cautiously and ended up looping a rope around the dog’s shoulders to pull her out of the muddy water. “The dog wasn’t aggressive at all, and in fact very timidly lumbered away from us, up the bank and into the thick lantana [a vine-like shrub ~ ed.] beside the pool.” 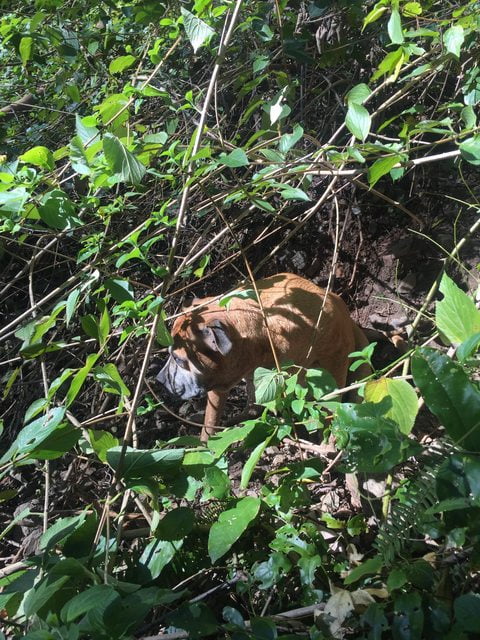 As the dog had been spayed, they guessed she was someone’s pet and there was a chance that she had been dumped or lost. They knew they couldn’t leave her there. “She was in a completely inhospitable section of bush, in a gully with cliff face and hectares of national park on one side, and a scrubby, rocky, unscaleable bank up to a busy road on the other.” There were also no houses within miles of where they were and no way for her to make it out of the gully. 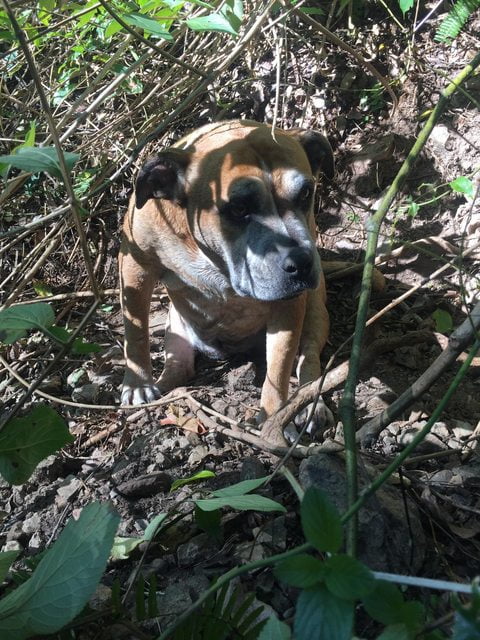 The dog wasn’t so eager to join them so they had to pursue her into the thick undergrowth. “When we crept up to her hiding spot, we saw that she’d made herself a little dugout in the bank, and she’d even made a tunnel through the lantana, down to the waterhole.”

They sat with her a while to see how she would respond. “She was very dejected, and obviously still exhausted,” writes dangerm0use. “She was still apprehensive, but not aggressive, so after a while I took a chance and gave her a scratch on the head… and she rewarded me with a lick on the hand.” 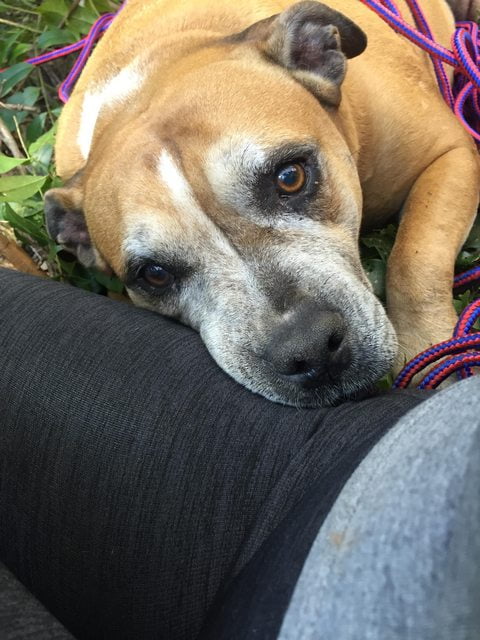 They noticed the dog was quite plump and nicknamed her “Miss Piggy” while they came up with a plan to get her out of the forest.

They settled on making a makeshift harness with the climbing ropes they had brought along because they realized Miss Piggy was exhausted and would have difficulty climbing over the large rocks. The bank they had to scale was extremely steep and laced with vines and covered with loose rocks. “Each of us were becoming hitched up on the vines, and Miss Piggy was making little to no progress.” 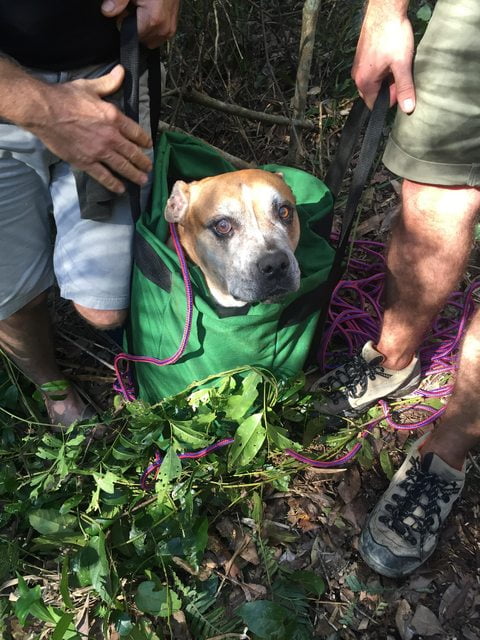 During the climb, Miss Piggy maneuvered out her harness and ran away. “She made a break for her pathway under the lantana, with me crashing after her, trying to prevent her from escaping,” says dangerm0use.

“The only way I could stop her was to get in front of her and head her off before she got to open ground. With her escape plan thwarted, she slumped down into the undergrowth and resumed her state as an immovable object.” 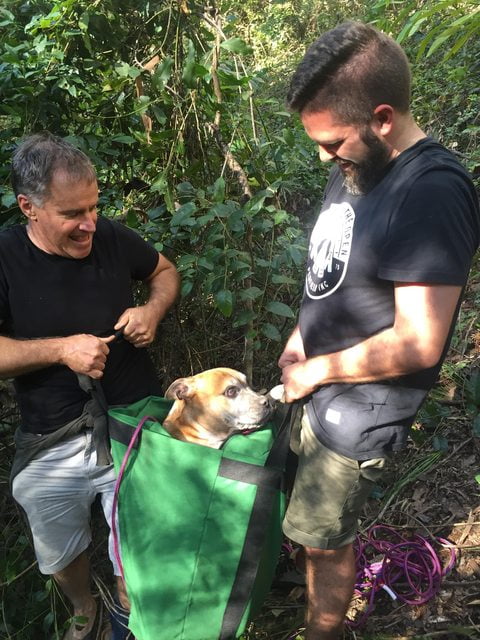 “Miss Piggy was understandably frightened and worn out, so we sat a bit longer trying to give her some time to calm down, with lots of pats and reassurance. The little sweetie showed her appreciation of our patience by wriggling over to me and resting her head on my leg. I hadn’t wanted to be too familiar with her to this point, but she gave me the go ahead to give her a reassuring cuddle.”

It became clear that they had to find a way to carry her up the bank. “My husband had a brainwave, remembering that we had a large canvas bag in our car. We figured that if we could get her into the bag, we could MacGyver together some apparatus to transport her out.” Luckily, she fit in the bag! 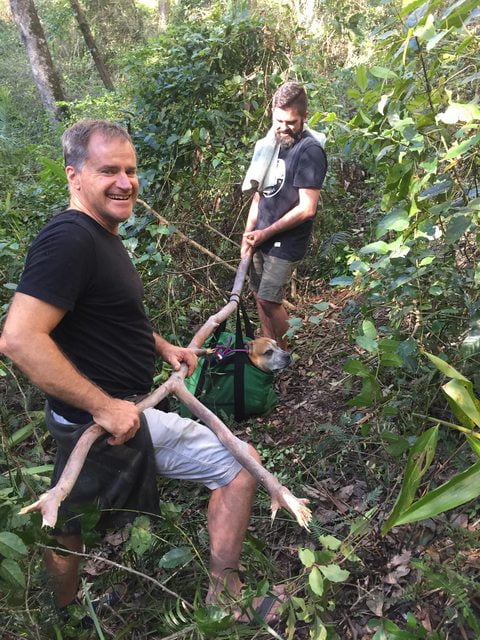 “The boys gave her a lift to see if they’d be able to carry her up. On their estimation, Miss Piggy tipped the scales at about 40 kg [88 lbs].”

“On flat ground, this probably wouldn’t be an issue, but we didn’t want to risk dropping or dragging her down the bank.”
They scavenged for a strong branch and threaded it through the handles so they could lift Miss Piggy over the lantana and vines.

After a 30 minute climb through the bush and much effort and exertion they made it to the road. 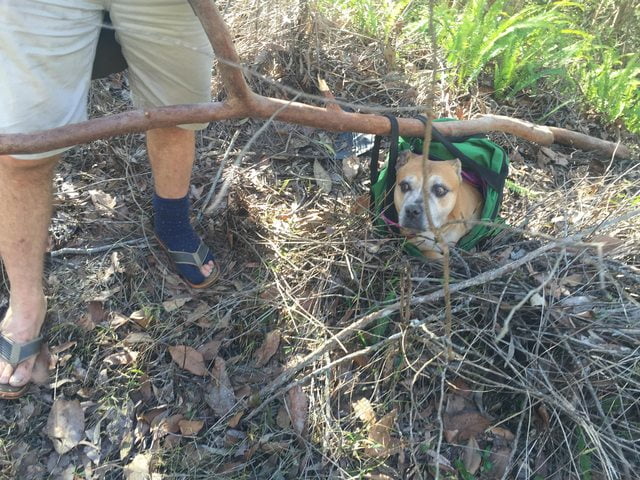 “We carried Miss Piggy along the side of the road up the where we’d parked.”
“Safely in the back of the car and down the windy mountain road, Miss Piggy was all smiles.”

“During the trip home she seemed to relax a lot more. When we opened the back of the car, we were greeted with a different dog – the little tail was going a mile a minute.”

After arriving home they gave Miss Piggy dinner and posted a picture of her on a Facebook page for lost pets in the area. Within 30 minutes they received a message! The man lived around 15 km (9 miles) from the creek where they found her. He explained his dog had gone missing on June 30, 2016 from his yard. 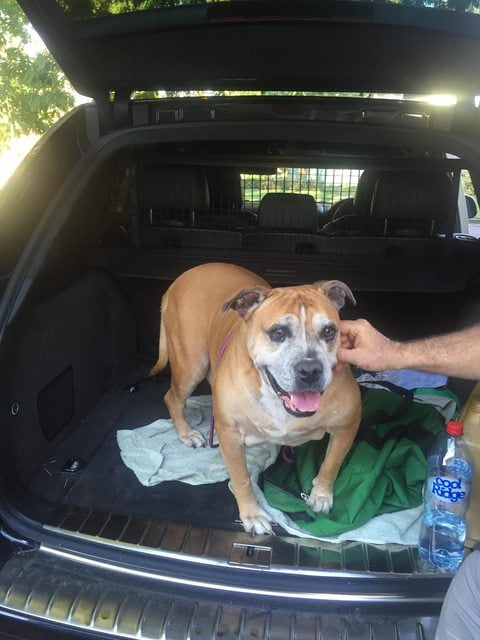 “We were stoked until he referred to the dog as ‘Bob’, and our hearts sank thinking he had lost a male dog. However, he confirmed that ‘Elly-Bobby’ (named after Ricky Bobby) was indeed his little girl, with various physical characteristics to prove it. 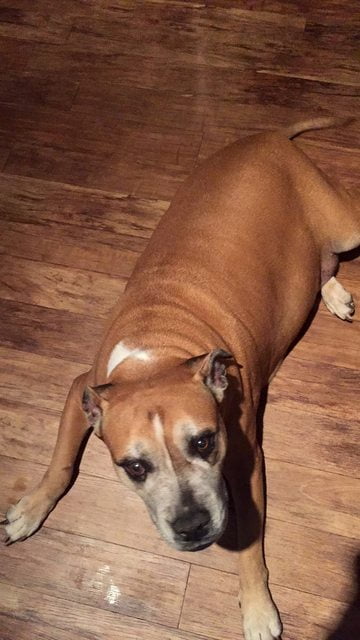 Bobby’s dad had mounted massive Facebook and poster campaigns to find her, and had been searching for hours every evening since she went missing, never giving up hope that he’d find her.”