For stray dogs, the streets are not a pleasant place. Most strays run away whenever humans come close, probably as a defense tactic. A stray dog in Romania in November of 2019 was different from the rest, as she followed people she came across on the streets, probably hoping for some food.

Stray dogs are adapted to the harsh streets, and with or without help, they manage to fend for themselves and survive from what people throw away. Luckily, this pup eventually got adopted by a loving home in Germany.

This particular dog did not seem to give up. Everyone looked at her from a distance and kept walking as we all do with stray dogs. 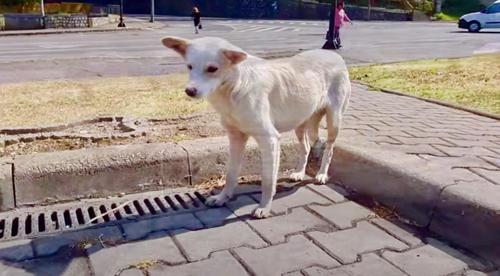 It was, however, the dog’s lucky day, as a Animal Rescue Organization called Howl of a Dog noticed her.

As they walked through the streets, Howl of a Dog noticed her and felt compelled to help out. Even with the traffic around, they approached her slowly. The easiest way to a dog’s heart is by a treat of snacks, and since the dog was hungry, she quickly warmed up to them. She seemed to notice their good intentions and adorably gave in to their warmth. 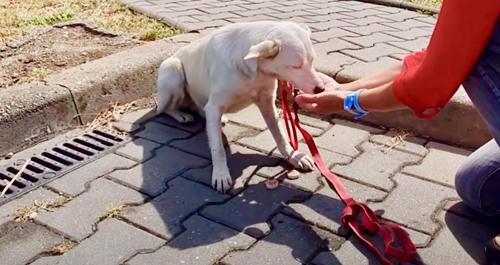 Getting the dog to their car was not hard, as she was already submissive, and they drove her to a veterinary clinic. At the clinic, the dog was taken through various check-ups, after which the doctors estimated her to be two years old. Despite her harsh living conditions, the dog was reasonably healthy, and they named her “Lily.” 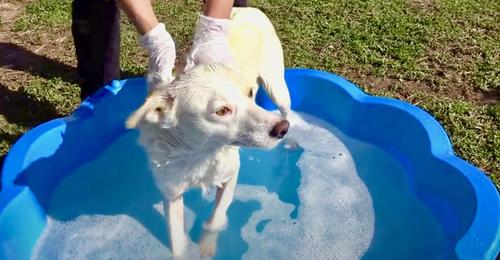 Her fairly good health still needed some boosting, so Lily got supplements. Lily was put on a leash, ready for her first walk. It was a confusing ordeal for the shy dog, but she slowly adapted and got comfortable around people.

Howl of a Dog is a volunteer organization in Romania which specializes in dog rescue. Their main task is rescuing abandoned, neglected, injured, and abused dogs from their unpleasant environments. The organization offers veterinary services to the rescued dogs, and later get them a permanent home.

Howl of a Dog’s main objective is to reduce the number of dogs in the streets, which is an issue of concern in Romania. In a bid to reduce the number of abandoned dogs, the organization offers free castration for dogs. They aim to build a safe society for everybody and provide free veterinary services to dogs owned by low-income families.

The organization aims to create awareness of the importance of having a dog as a pet, by showing the society how a dog can offer love loyalty and eternal friendship to their human owners. They also show the world how a dog brings happiness and joy into a family. Howl of a Dog often rescues mature dogs or dogs that need care, such as those with medical needs.

The organization focuses on the dogs that need care, since they are at a higher risk of having their lives ended, due to their inability to survive. Dogs that are less attractive to potential adopters, such as those with physical disabilities and abused dogs get a chance of getting loved.

According to a Facebook post by Howl of a Dog, Lily got a new home in Germany. She is now happily united with the new family and adapting to the environment. It is a delightful journey from a lonely homeless dog to a currently healthy and happy dog, which was made possible by Howl of a Dog who decided to get her off the harsh streets.

Howl of a Dog is an organization that proves that one good deed goes a long way in helping the society. By assisting Lily to get a new home, they helped get a stray dog out of the streets, and at the same time, blessed a home with a sweet, adorable pet.