When a Los Angeles-based organization Rescue From The Hart found out about a purposely starved dog on the brink of death a few years back, they pulled together and removed the animal from her abusive environment to show her love, affection, and hope for a life renewed. It took months of diligent work, but finally, the once dying dog began to thrive and found her forever home with a family who would love her unconditionally.

Rescue From The Hart uploaded a video detailing this incredible story back in 2015.

When Rescue from the Hart found the dog, who they would name Angel, they knew it would take a lot of work to bring the emaciated dog back to good health again — if it was even possible. When the rescuers found her, you could see every bone protruding from Angel’s body.

Her condition was so horrific, in fact, the poor animal couldn’t stand up on her own.

Because they couldn’t feed her too much food too quickly, the volunteers had to be patient and take their time showing Angel that she could trust humans again.

One day, after several sessions of being hand-fed, Angel finally found the strength to stand up on her own and wander around the room to gobble up pieces of food strewn about the floor. It took months of hard work and dedication, but Angel was finally getting well again.

When an animal has been abused so severely for so long, it takes a lot of patience, time, love, and dedication to find trust in others again. They were pleased to see that another temporary resident of Rescue from the Hart, Lily, had become fast friends with Angel. 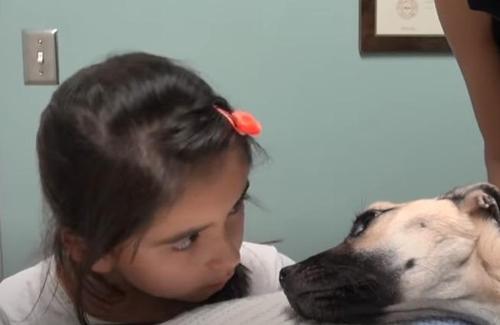 Now that Angel was displaying signs of trust and a healthy body after months of working closely with her, the team at Rescue from the Hart knew it was time to find her forever home. It didn’t take long for one little girl to look right in this pup’s loving eyes and decide to take Angel home. 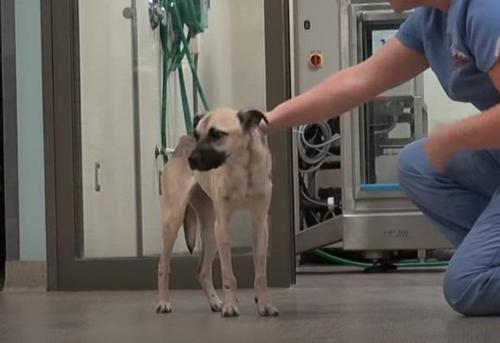 Once a dog who didn’t trust humans enough to eat, purposely starved to the edge of death, and unable to stand on her own, Angel is now a thriving member of her new family. Not only does she have a family of humans that are dedicated to showing her love and affection, but she even has a playmate who she enjoys frolicking in the backyard with.

Animals like Angel need the help of volunteers like the good-hearted people at Rescue From The Heart, but these rescuers can’t make a difference on their own.