Sanitation workers don’t have a lot of time to spend in just one location. The demands of their job state that they must hit an untold number of homes on a given workday. The day often involves dealing with the stress of lifting and hauling trash. It isn’t an easy job, and quite often it can also be thankless.

The job isn’t really all glitz and glam, and since the garbage truck comes to houses at odd hours, sanitation workers may also not have anyone to socialize with. This is where furry friends come in; a dog is probably used to seeing service workers come by the house every other day.

This familiarity tends to grow over time, and interestingly, dogs often become accustomed to and even look forward to seeing service and sanitation workers at the door. 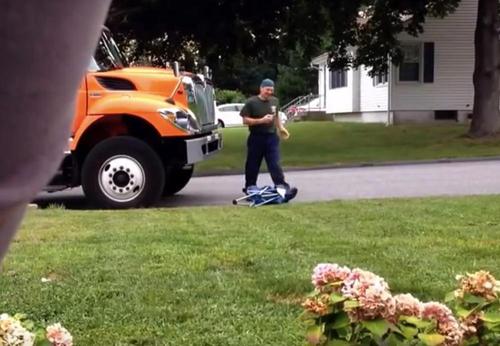 When it comes to people, however, they don’t usually take time to thank the local “garbage crew.” Even if they are seen and greeted, most people do not go out of their way to thank their local garbage truck workers. While humans aren’t always friendly, the average household pet often is. In a small American town, a loving dog named Shelby made friends with the local garbage truck driver. Unbeknownst to the driver, the homeowner filmed the exchange in August 2019, and their interaction is so heartwarming. Dogs truly are a man’s best friend, and videos like this prove that dogs don’t usually discriminate. They understand and love the complete human, no matter what, and this video shows just that. 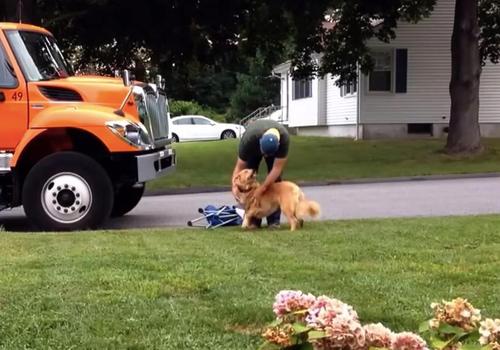 At the beginning of the video, we see the driver pull up in front of Shelby’s home. As he steps out, he knows exactly what to expect. He has confidence in his stride, which shows he has done this a few times before. He’s gotten down at that home for one reason: Shelby. Shelby the golden retriever knows that her friend is there, and we see her as she runs out to see the man behind the wheel. Joshua Byrne, Shelby’s owner, decided to record the sweet interaction because he had noticed that the garbage truck driver and Shelby became fast friends, according to Wamiz. The driver would stop what he was doing to pet and play a little bit with fun-loving Shelby. This sort of loving relationship is probably not that rare, as service workers tend to run into a lot of pets during their workday. They are bound to make a few friends along the way! 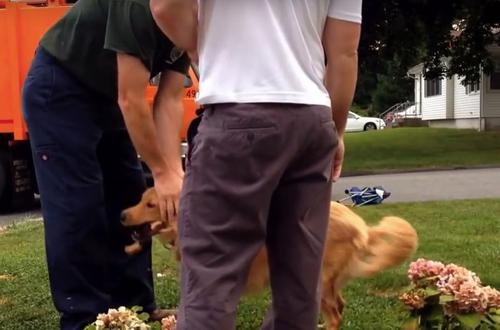 As Shelby happily approached the truck driver, he also shows his joy upon seeing her by leaning down and petting the hyperactive Shelby. Isn’t it so cute how dogs just can’t contain themselves when they are happy? We also see that the driver has a large grin pasted across his face while he pets and rubs down Shelby and the two take some time to bask in each other’s company. We can’t help but think that this must be one of the truck driver’s favorite stops during his workday! Shelby reveals a friendliness that even the most outgoing dogs don’t always possess.

After a nice belly rub with the garbage man, Shelby walks over to Byrne who also greets the driver, and the two humans have a chat before everybody continues on with their day. We see by then that the driver is smiling ear to ear, probably from having his day completely made thanks to Shelby. It is a sad thing that many service workers — especially garbage pick-up crews — find themselves taken for granted or unacknowledged by the general public. It may be due to the nature of their jobs; we don’t always pay attention to retail or fast-food workers when we are out, for example. While it may seem like this is just how things are, we can always make the effort to be kinder to the people around us. Animals teach us this through their actions. Shelby certainly has shown Byrne that being a kind person is the best course of action and that it benefits both parties when each makes the effort.

The fact that Shelby is a golden retriever also helps her to be more friendly and playful with the people around her. American Kennel Club reports that this breed has consistently been in the top 10 favorite dog breeds for families in America for the last few decades. They are currently ranked third most popular among 195 breeds. They are best suited to be family pets and make devoted and loving companions. Along with their beautiful features and rich coat, golden retrievers are also highly intelligent and active creatures that can excel in various fields.

This breed can trace its lineage back to Scotland. There used to be a belief that golden retrievers were descendants of Russian circus dogs, but this was quickly put to rest when the records of Lord Tweedmouth of Inverness, Scotland, were released. Lord Tweedmouth bred a “yellow retriever” named Nous with a liver-colored Tweed Water Spaniel named Belle, and it is most likely that the goldies of today can be traced back to Nous and Belle! We have Lord Tweedmouth to thank for this extraordinary breed.