When Lee Asher met Tony, a german shepherd at the Sacramento SPCA shelter, he wasn’t in his best health. Weighing a whopping 150 Lbs, the dog was in desperate need of somebody to love him and help him embark on a weight loss journey to get rid of one-third of his body weight.

Already a dad to eight other rescue pups, Asher knew he wanted to give Tony a home and get him down to a healthier weight, so he adopted him and started him off on a long adventure to help the canine lose 50 Lbs.

At the shelter, Tony was shy, timid, and preferred to keep to himself.

Rescue workers said the german shepherd was found as a stray a while back, adopted, but then returned to the shelter shortly thereafter. 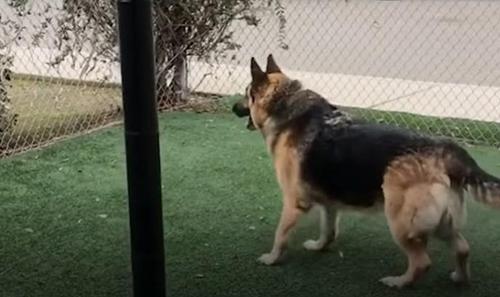 “I think Tony had really given up,” Asher told the Dodo.

“How a dog is feeling on the inside is what you see on the outside,” he added. “He’d been so used to people not giving him affection; I didn’t want him to think that’s what’s going to happen.

I’m going to swarm this dog with so much love so that he knows that he is the most special dog.”