Being a new mom involves a lot of hard work and stress! For one pit bull mother, her job was doubly hard as she was abandoned on the cold steps of the Sacramento SPCA building with her litter of ten puppies. With no food, no water, and nothing comfortable to sleep on, the dog and her babies were in a rough spot. Thankfully, the SPAC team was ready to help!

Employees report that the puppies were tiny, most likely just born before the mother was dumped at the doorstep. While we’re sure that this sweet mom was confused about why she was being left and probably wanted to run after her owners, she stuck right by the side of her babies and did everything in her power to ensure that they were safe. 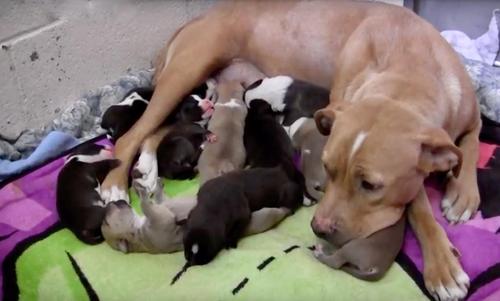 While the shelter was glad that they had been the ones to find the dog and that she had been left on their doorstep rather than somewhere else, they found themselves presented with a challenge. While the shelter usually puts their dogs in foster homes, it seemed unlikely that anyone would want a mother dog and ten puppies all at once! 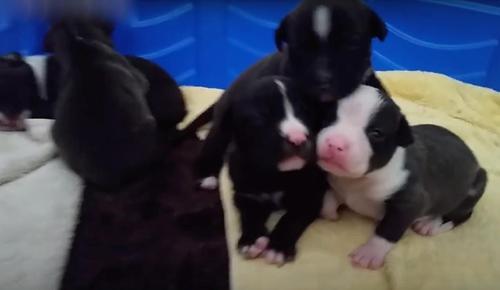 Amazingly enough, a kind guardian angel came just in time and volunteered to take on the entire family. It was instant love at first sight, with the foster dad reaching down to pet the puppies and the mom glad to let him.

Not only did the foster dad have a blast taking care of the family, but he also shared some of the joy with the rest of the world by posting their pictures on the social network.

In the end, the foster dad cared for the puppies for several months, until they were big enough to be weaned and out on their own. Then, the shelter separated them and sent them each to their own, happy homes!