We often wonder how a dog feels about having children, as it’s likely not something which is planned in the same way that us humans plan a pregnancy. What’s more, we would love to know if a dog is actually aware that they’re carrying their babies- or is it a surprise until the day that the birth happens?

Well, we’ve since come across a story which appears to prove to us that dogs are completely aware that they’re carrying their babies, even before they make their big entrance into the world.
The story is about a pit bull who is heartbroken to discover that she has tragically lost her litter.

The new mom was in mourning, and rescuers came up with an amazing way to make her feel better- by giving her her very own orphaned puppy to look after.

After finding purpose with the orphaned puppy, the pit bull was soon back to her happy self again, and it was the best of both worlds, because the orphaned pup now had a loving mom to look after her. What a great idea! 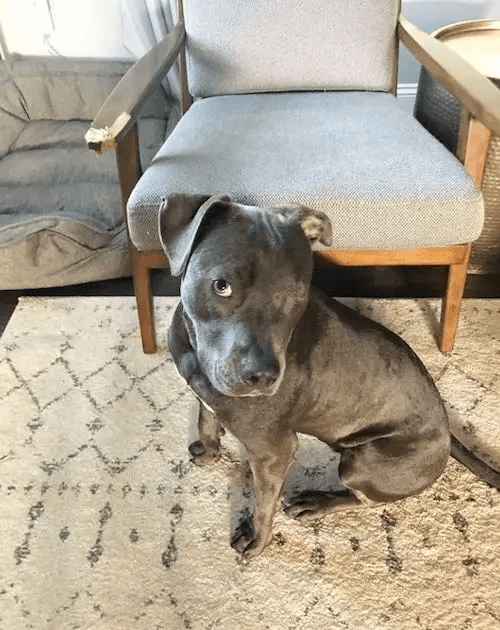 Daya the pit bull was discovered wandering the streets in York South Carolina in the middle of winter- and she was obviously pregnant. Animal control officers reached out to local shelter Halfway There Rescue, who arranged for Daya to be fostered so that she could give birth in a home environment rather than the shelter. 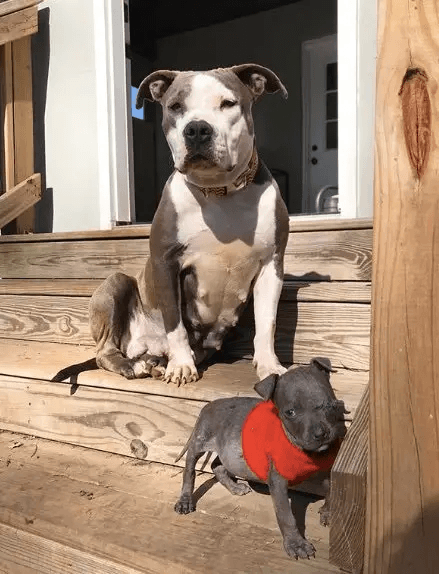 The poor mom-to-be had a traumatic pregnancy, which resulted in her needing emergency surgery because of infection complications. In the process, she also lost her litter.
It was clear that the poor dog was aware that she had lost her litter. Daya went into mourning, and shelter workers soon became worried about her. 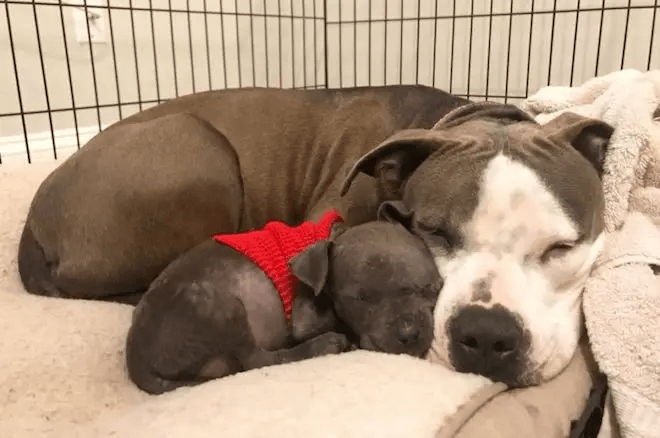 Raisin was an orphaned puppy who had also been found wandering on a road. She had an injured eye and was very sick- and needed nothing more than a caring, motherly figure to look after her. 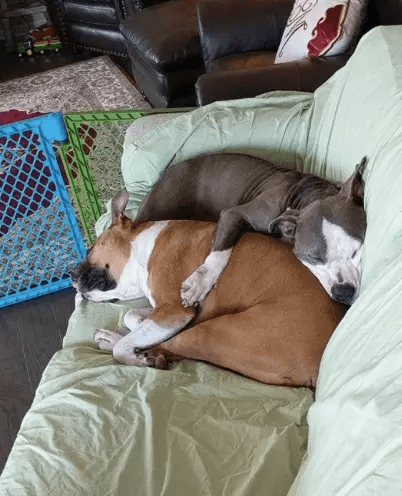 So what do you do when you come across one puppy who needs a mom, and one mom who needs a puppy? Bring them together, of course! The team decided to introduce Daya to Raisin, and the pair instantly connected. Raisin felt safe for the first time ever, while Daya felt more fulfilled and complete.

Daya cared for Raisin until the little pup was past weening and grown, and now that Daya’s motherhood urges had been satisfied, she settled happily into life with her foster family, who had decided to adopt her.

Raisin has also gone on to have her happy ending, having being adopted by the family who had fostered her! She now has a younger sibling who she gets on with brilliantly, and it’s all thanks to Daya’s top notch parenting.