Belka, an Alaskan Malamute and Siberian Husky mix, was just 20 days old when she howled for the first time ever. And thankfully someone caught it on video. While we can’t find the exact source of the clip, we loved it and wanted to pass it on!

Welcoming a new member of the family is exciting. This is true even if the family member is not a human. In this case, the newbie is a 20 day-old puppy, according to the video’s description.

This puppy is a Huskamute. Huskamutes have a blend of Siberian Husky and Alaskan Malamute genes. This means they have characteristics of both of these sturdy dog breeds.

20 days is rather young to be away from mom. Fortunately, mom isn’t far away at all. Mom is a family dog in this home. 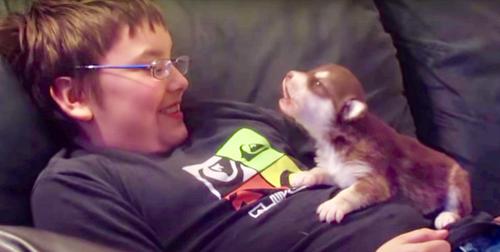 On this particular day, the puppy is closely guarded by a young boy. The school-aged youngster lounges on the family couch as he carefully balances the pup on his chest. He’s also all smiles as he enjoys life with his new companion.

Initially, the boy watches and listens to his little friend, Belka, the puppy. Belka moves as he inhales enough air to power his short vocalizations. The boy laughs. 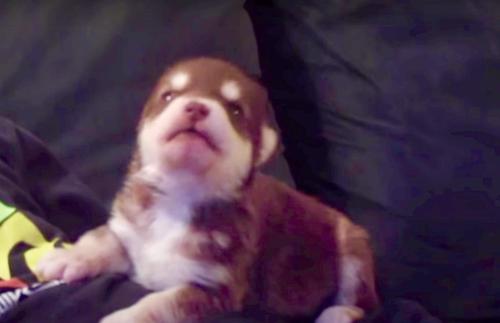 Since the puppy isn’t going to learn how to howl by herself, the boy lets out a few practiced howls. The howls sound much like they’re coming from another dog. Clearly, this young man has had experience with howling dogs.

At first, Belka laid closer to her human’s chest and listened. After some careful attention, Belka lets out a howl. It’s longer than any of her previous attempts and sounds more like a proper howl with a trill added to it.

After Belka’s howl is substantially improved, the two howls together. They also have a howling conversation in which they take turns. The pair doesn’t just sound good together; they look like they’re having a marvelous time together.