Nowadays, it’s hard to see the light at the end of the tunnel. Oftentimes, we cling on to anything that will give us happiness or a glimmer of hope. Sometimes, hope comes in the form of a cute dog video or wholesome dog rescue stories.

If you’re a regular reader of our dog rescue articles, you might have heard of the Dog Rescue Shelter Mladenovac. Active since 2007, it is one of few shelters in Serbia and it is the largest non-profit and no-kill animal shelter that comes to the aid of abandoned dogs. They are located just 1 hour south of Belgrade and easily accessible to all of Serbia.

They are open 7 days a week which makes the adoption of a pet convenient for the general public and enables them to place all homeless dogs and cats who urgently need help. 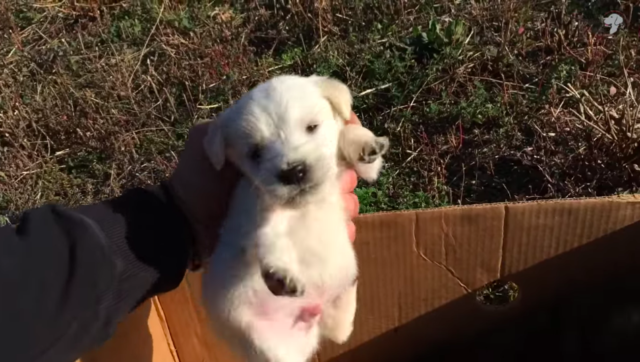 As of today, their shelter has 350 adult dogs, 20 puppies, and 20 cats rescued from the streets.

Their most recent rescues are both, coincidentally, abandoned dogs in a cardboard box. It’s heartbreaking to think that people just leave these helpless animals to their own devices, which will ultimately lead to their demise, if not rescued.

Upon arriving at their shelter, they noticed a cardboard box outside on the side of the road. Inside were puppies who were just about five (5) weeks old, far too young to be separated from their mother. They could only assume that whoever left them there wanted nothing to do with the puppies and took advantage of the fact that the shelter takes care of any animal in need. This apparently happens often in their area; people are cruel to puppies and have no regard for their safety. Puppies often don’t know what’s going on around them, they’re susceptible to various illnesses and diseases when left uncared for. So, it was a good thing that the shelter was there.

After checking each puppy, they take the puppies inside and make sure that they are given the nourishment that they need. Their foster mom feeds them using a baby bottle every three hours. It won’t be the same as the one they can get from their mother, but it’ll be enough to keep them going. A month later, the puppies have fully adapted to their environment and are ready to be transferred to a forever home.

Slowly each puppy got adopted and was given the chance to live a long and happy life. But, according to the shelter, there are still so many dogs that are in search of a forever home.

A caller informed the Dog Rescue shelter that there’s an abandoned mother dog and her babies inside a cardboard box under a car that needed their help. Immediately, the rescuers went to the location of the caller. Upon arriving and meeting the caller, they said that it had been raining all night and they didn’t know what to do aside from putting the dogs inside a box and placing the box under a car.

The mother dog was huddled with her pups inside the box, barely moving. She was most probably scared. Slowly, the rescuer tried to gain the trust of the mother dog. Approaching her first and talking to her calmly, then he decided to bring out the leash and crate to transfer the dogs too. He came prepared with a nice bowl of food to offer the mother dog, which she slowly started to accept despite obvious signs of hesitation. It was apparent that Milan cared about the well-being of the dogs despite only having encountered them there. Gently, he started to move the box out to get a better chance of putting the leash on the mother dog, but she panicked and quickly jumped out of the box. This gave the rescuer the opportunity to carry the babies inside the crate.

As all of this was happening, the mother dog just started from a safe distance, she didn’t seem angry or protective. Maybe, somehow, she knew that they were in safe hands. This poor mother dog was clearly scared but showed her bravery and willingness to trust those who wanted to help her and her six babies, such a good mother she is. After successfully placing all the babies inside the crate, the rescuer then tried to approach the mother dog again. Approaching older dogs is a bit harder, especially when they’ve lived a life in the streets, they don’t trust humans as much. Offering her food didn’t really help, she still kept her distance. So, the rescuer figured that leaving the area near the crate would make the mother dog go near it and she did – slowly stroking her to establish trust, she allowed him to carry her to his rescue van that had a change that perfectly fit her. She looked kind of weary seeing her pups in a different crate, so they transferred her pups inside hers.

Once they arrived at the shelter, they made sure that the mother dog had a big enough bed that would keep her and her babies warm and secure. No one knows what this abandoned mother dog had to go through and the possible traumas she had, but now she can finally take care of her babies without any worry.

Life on the streets for strays and abandoned dogs is incredibly risky. Some of the stray dogs are lucky enough to be given a second chance to live a long life, but some dogs are not so lucky, they are poisoned or are often hit by cars. That is why this shelter has been doing a wonderful job at placing 300 dogs and cats since they opened their doors to strays.