Taryn Coates and her husband Dave began fostering a Great Dane late in March after the dog was found abandoned in the wilderness in Port Elizabeth, South Africa. She was named Jez. Her rescuers suspect she had been fending for herself for 1 to 2 months before she was found. The two-year-old dog was in poor health and fearful of people. She was going to need a lot of help.

After caring for Jez for many weeks, Taryn wrote a letter to Jez’s unknown former owners. In it, she describes the struggles and triumphs that Jez, and the rescuers caring for her, have gone through. It’s a heartfelt piece about the challenges and joys animal rescuers experience in nursing an abused dog back to health and is well worth reading. 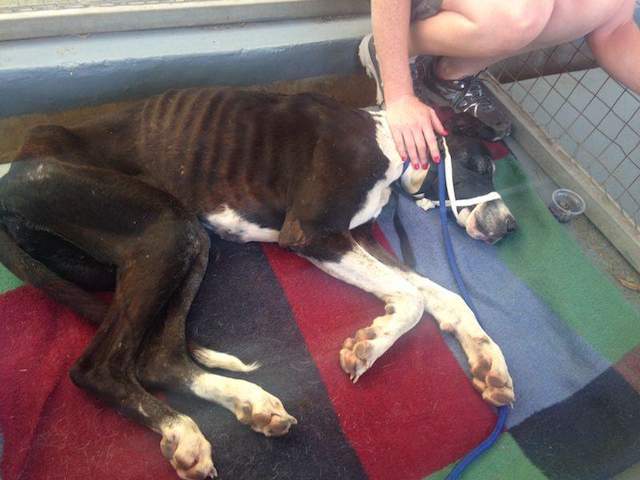 “WE rescued your dog. Do you remember her? The one you dumped in the bush a few kilometres from an animal shelter, where you left her to fend for herself, to scrounge for food, to find somewhere to sleep, to wait for you. In case you have dumped more than one, I am talking about the female Great Dane, the gentle, lovely, soft creature with the white neck and the tiny patch of black fur just behind her ear, that is shaped perfectly like a heart. Bet you never even noticed that did you? Bet you never payed enough attention. When you dumped her did she run after your car as you sped off? Did you look back at her in your rearview mirror and feel anything? Even a twinge of guilt? Didn’t some fibre of your being acknowledge that what you were doing was beyond cruel, and that she, this magnificent creature, deserved better?” 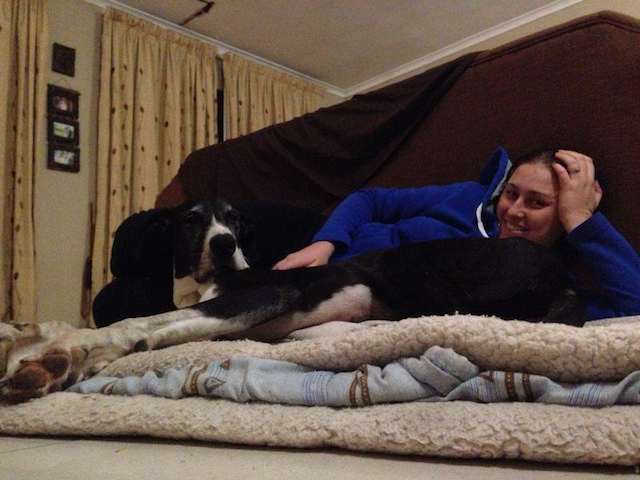 “It took 45 minutes to catch your dog, who was so terrified of humans after two months in the bush that she was fear aggressive. Did you know that your beautiful, regal, gentle Great Dane had to be muzzled for her own protection, and ours, that she was so sick with biliary, and so thin, that we didn’t think she would make it? Did you know that half of Port Elizabeth (South Africa) was praying for your dog, that she had visitors at the vet, who brought her blankets, toys, and treats, and willed her, with every fibre of their being, to survive. 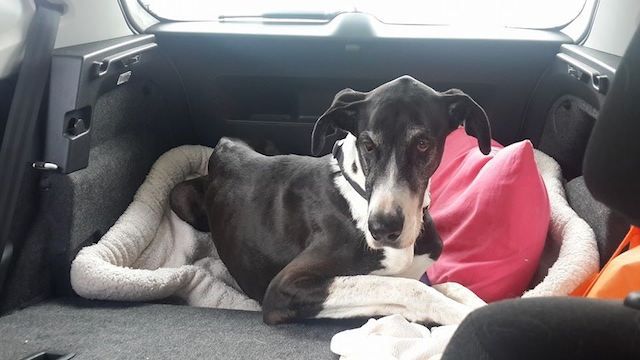 “We talked to your dog, even though we could not get near her without her trying to bite us. We talked to her about how she was safe now, about how no one would leave her again, how her life would be calm, and restful, and full of joy from here on out. We made promises to your dog, the kind of promises you should have made when you bought her and took her home to become part of your family. We promised she would never again be hungry, that a harsh word would never be spoken at her, or a hand raised to her in anger. We promised her walks, and treats, warm bedding and long walks. We promised her all of this and more, we used these as bribes, to get her to survive, to will her into wanting to live, so that we could spend the rest of our lives proving to her that not all humans are like you.” 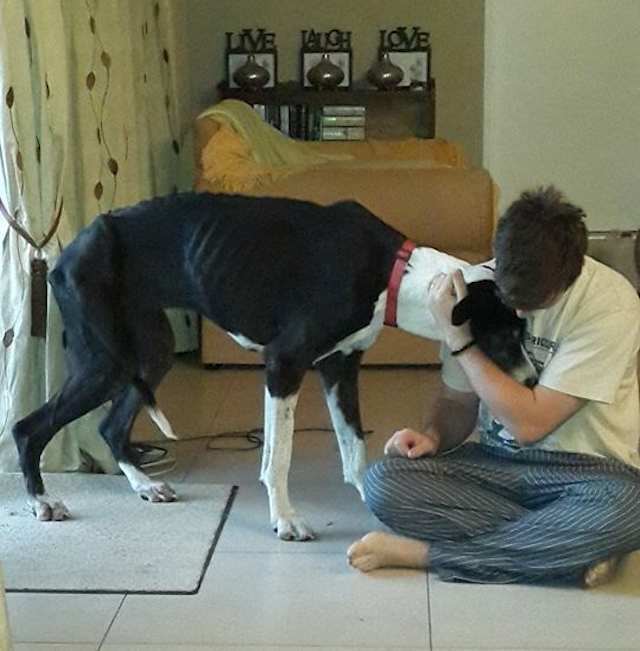 “You broke your dog. The moment you drove past the gates of the animal shelter where she would have been taken in and cared for until she could be rehomed, in that moment you broke your dog, and you became a lesser human being. When you stopped in the bush a little way down the road and left her, you broke her spirit as surely as if you had taken a stick to it and beaten it. And it was here, two months later, no doubt still waiting for you to return to fetch her, that your broken dog collapsed, dying, in an open container, the only shelter she could find. You did that.” 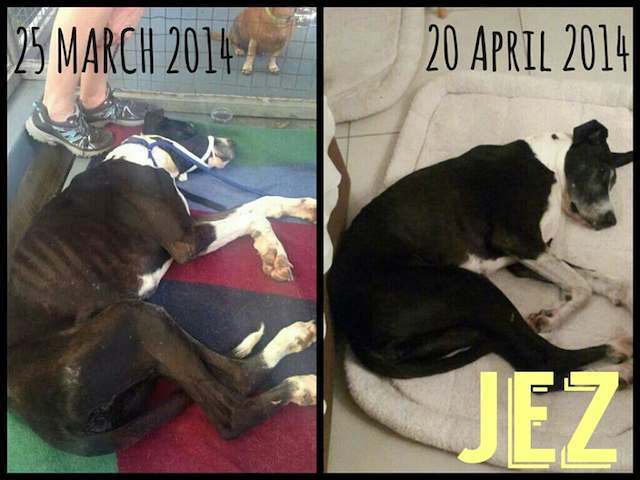 “I don’t care what your situation is or was. I don’t care how bad your life is, I don’t care about your money problems, or about any loss you may have suffered. I don’t care that you couldn’t cope with a Great Dane, I don’t care, not because I am heartless, but because nothing you could ever say to me, could begin to excuse what you have done. If YOU had cared, you would have done the responsible thing and dropped your beautiful dog at a shelter where people would have lined up to adopt her. But you didn’t, you did not even offer her that little shred of dignity, the right to a safe and loving home, you didn’t do that for your dog, and I am sorry, but that makes you a pretty poor excuse of a human being.” 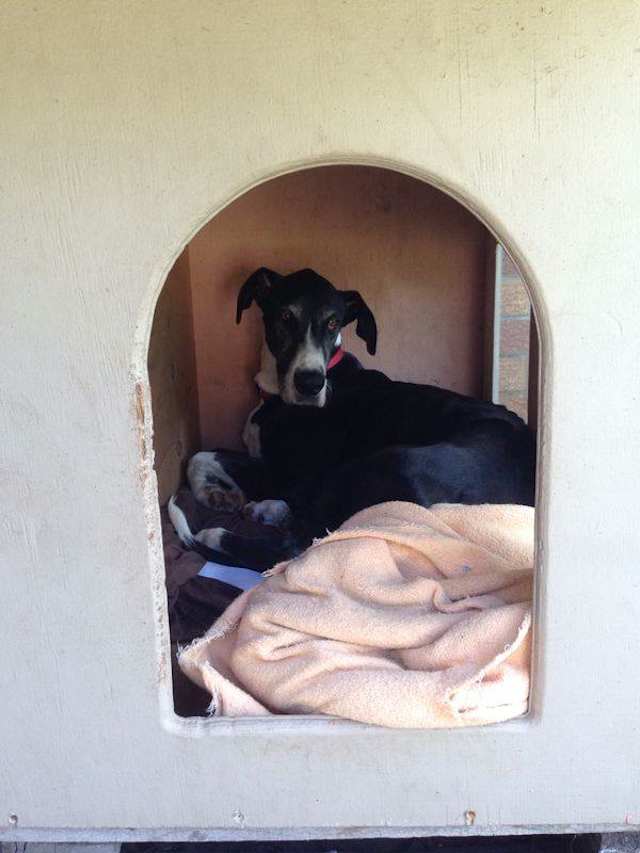 “Against all the odds, your dog pulled through. She fought. She rallied, she used every single last shred of strength she had left to heal herself. She was given the dignity of a name, Jez, and we took her home. Donations poured in for your dog, donations from complete strangers, strangers, who cared so much about a dog they have never met, that they were moved to action. Thats how awesome your dog is. Three days after being found in the bush Jez came home and for the first time in who knows how long, she slept indoors, on a soft bed, covered in a fluffy blanket. She was warm, and safe, and loved. 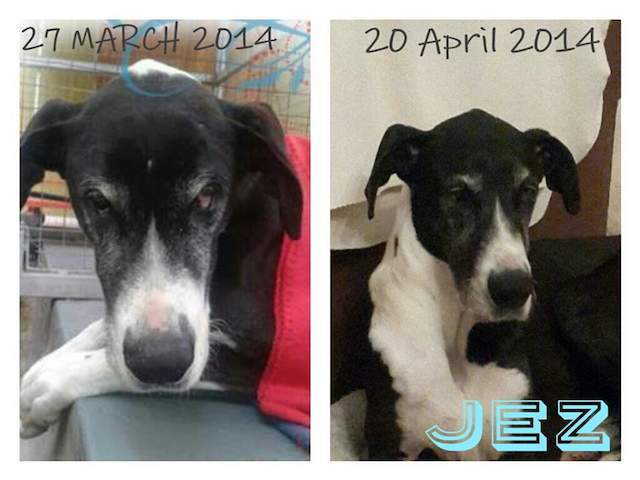 “We spent hours getting your dog to trust us. Hours convincing her that she was in fact allowed in the house, was allowed to be part of the family and of the daily comings and goings. We were nipped, we were frustrated, but we loved her anyway, and in fact loved her more because we could see how hard she was fighting to break out of the rut she was in, the rut that you dug for her. You see, we had to show your dog that we aren’t all like you, that there are in fact humans who want to help, to love, and to nurture. Do you know that it took 4 days for your dog to approach us, and when she did she crept across the floor with her tail so far between her legs that it was touching her chest.” 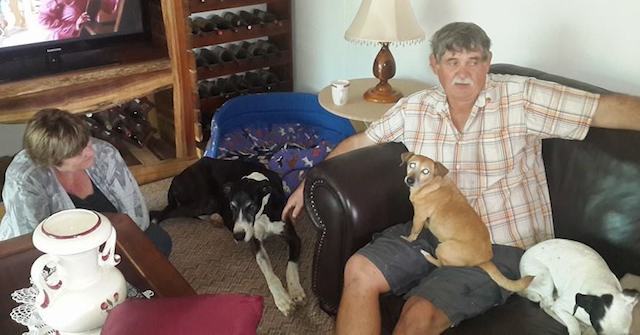 “That moment when she laid her head on my husband’s shoulder, terrified, as if waiting to be reprimanded, or hit, that moment broke me. She was skinny, and sick, but that was easy to fix, what was going on inside her head was a battle only she could fight. What you have done to your dog is so much worse than just not feeding her. You destroyed her spirit, you made her afraid to live, afraid to be a dog, you made her afraid to be, to exist, and that, thanks to you, is going to take years to fix. And we will do it. Every one of us is invested in your dog, in fixing her, in loving her until she no longer feels any pain.” 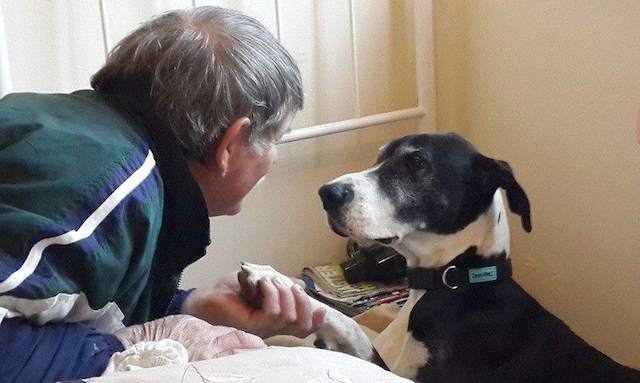 “We love your dog with every fibre of our being. We had to teach her how to become part of a happy, healthy family. We celebrated every moment, every time she went outside to wee on her own, every time she finished her food, or ate her medication without us having to wrap it in cheese. We celebrated when she sat for the first time, and when she barked at a person walking by, because your dog was beginning to engage with life again, she was learning to be a dog, and she was learning to love. We sent each other texts about every little thing she was doing, where she was lying, or the first time she had enough energy to run into the garden instead of walk. We invested time, energy, and love into this creature and she soaked it up, rewarding us in only the way a rescue dog can.”

“You broke your dog, but we fixed her. Bernadette who rescued her from the container, and who lived with the knowledge that Jez would forever be weary of her because she associated her with that scary time in her life, but who visited her anyway. Dr Ferreira and his colleagues from Walmer Vets who treated her with kindness and compassion, even when she tried to bite and nip and struggled against their touch.