In Udaipur, India, a horrifying scene of animal endangerment became apparent to hundreds of people as a dog was discovered on the street, completely stuck in tar and unable to move. Fortunately, this quickly turned into a story of triumph as he was able to make a full and complete recovery, thanks to his rescuers.

The unfortunate victim was found inside a steel barrel, completely encased in tar. She had been without food or water for several days, with precious time left before the situation became dire. Animal Aid Unlimited volunteers tried freeing the animal from the barrel, only to realize that they would need to move the barrel with the dog still inside for a more detailed rescue operation. 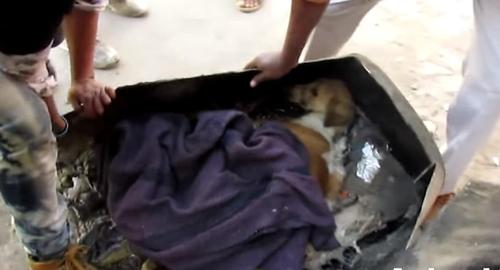 Once the barrel was moved to a safe location, they were able to then cut the barrel open and begin the painstaking process of loosening the tar around the animal in order to free him. 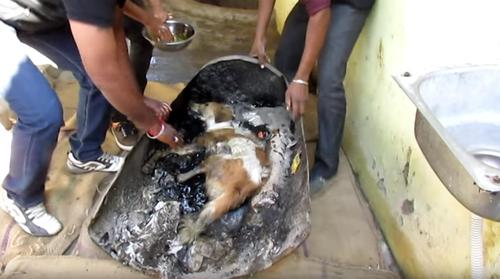 After several hours of diligent and sometimes heartbreaking work, the dog was finally freed from her sticky prison. Unfortunately, the hours of sitting in the tar had not been kind to the dog’s coat and skin. She was badly burned from the acidity of the tar, and she needed immediate medical attention.

Everyone working on the project realized the rescue happened just in time. 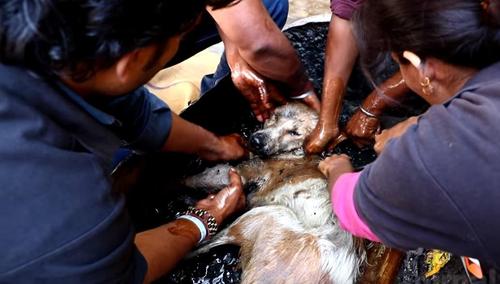 One of the volunteers cited the incident as he experienced it: “We think she may have gone inside the drum to get warm during the night, and that her own body heat started to melt the tar which she then sank into and was unable to free herself from. When we found her she was no longer struggling and seemed to have completely given up all hope.”

Working with vegetable oil, the volunteers diligently pulled at the tar as it was softening. Once the dog was free enough to move around, they began working on the areas of her fur that had been matted to her skin with the sticky substance. Finally, they concentrated their attention on her badly burned skin, doing what they could to soothe it and provide the poor animal comfort. 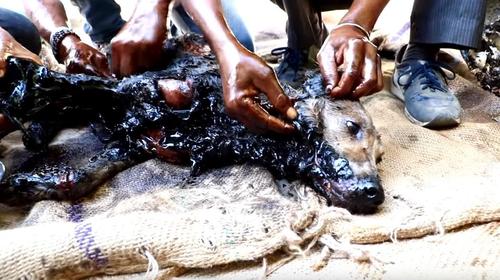 After the dog had been extricated from the disastrous mess, it took about three hours for her to regain enough strength to stand again. Volunteers affectionately began referring to her as “Asha”, which means “hope” in Hindi. 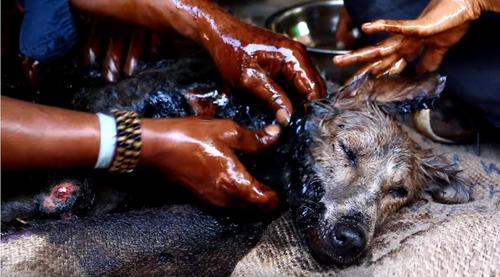 Animal Aid volunteers play an instrumental role in providing care to neglected animals, particularly in India. Over 3500 dogs are rescued from the streets of Udaipur alone, which is an incredible feat. 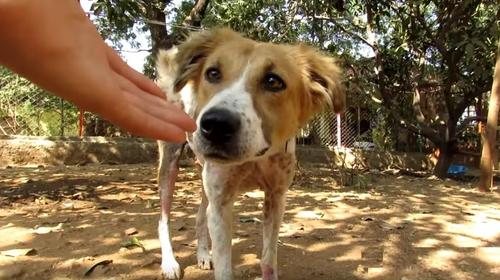 In America, the issue of neglect is prevalent as well. After the natural disasters around the country, many animals were abandoned as people sought shelter and protection from the devastating storms. One rescue story with a happy ending occurred in North Carolina, where six dogs were rescued from a locked cage that was dangerously close to flooding.

When rescuers found the poor animals, they were on their hind legs, desperate to get out. The Leland property had been abandoned by its owners who went in search of higher and safer ground, leaving their animals behind.