Three years ago, 15-year-old Hannah Rountree lost her beloved cat. The black and white house cat named Spunky ran away while the family was on vacation. Despite their search efforts, the cat never came back. Spunky left when Hannah was only 12 years old, but the long-lost cat inspired the girl’s love for animals.

As she got older, she ended up volunteering at her local animal shelter.Hannah showed up for her second volunteer shift at Saving Grace Pet Adoption Center expecting to help out and play with some cute kitties. What she wasn’t expecting was to be reunited with her long-lost Spunky.

Out of all the cats at the shelter, the teen couldn’t help but notice one particular black and white feline. The cat had recently been surrendered and was being kept in the shelter’s catio. 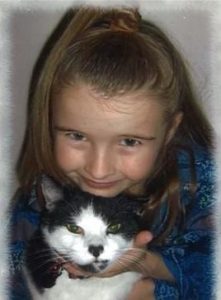 A lot of cats can look the same, but there was something special about this one…
Hannah told a local NBC news affiliate,

With a little investigation, shelter staff determined that the familiar feline was indeed Hannah’s childhood friend. Hannah was thrilled to have her cat back in her arms and amazed at the serendipitous situation that brought them together. 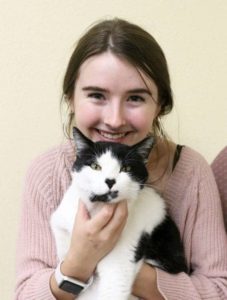 Wendy Kang, Saving Grace director, said Spunky was first brought to the shelter back in September. He was found as a stray and renamed Bear. It didn’t take long for the cute cat to be adopted, but that match didn’t stick. The adopters were looking for a mouser, and sweet-natured Spunky wasn’t interested.

Spunky’s refusal to hunt ended up being the best thing that could have happened to him. The family returned the reluctant hunter to the shelter just in time for Hannah to find him.

Kang said, “It’s just perfect that she was able to find her pet while helping us.”

Hannah and her family of course welcomed their long-lost cat back home with an abundance of love. They report he has already settled back into his old life, and they’re thrilled to have their family together again. Hannah says that, “He’s very comfortable…I knew he would just perk up and remember.”