When Terri brought Cricket, a rescued Labrador, into her home as a foster, she wasn’t expecting him to be with her for so long.

The poor dog was so terrified, he couldn’t be adopted until he warmed up to humans a bit. In an interview with The Dodo, Terri explained that Cricket would do anything to stay away from them and found one little spot of security in a big crate in the house.

Cricket hardly left the craft for three to six months. She hid in terror and wanted nothing to do with humans. She wasn’t aggressive or mean, just truly terrified. It was so sad!

While Cricket wasn’t responding to human interaction very well, Terri notified that she took to other dogs much easier. 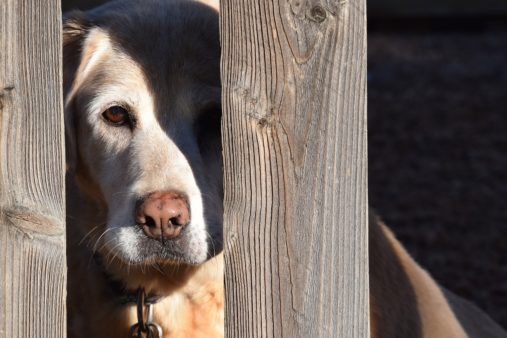 Thankfully, it was the other dogs in the house that slowly helped Cricket gain a little bit of confidence. Eventually, Cricket was out and about playing with the other dogs – and even taking some treats from Terri and her family.

Once Terri felt that Cricket was comfortable enough to leave her home, the dog was finally put up for adoption. More time passed, and they finally found someone who was the perfect match after a year.

Cricket is still skittish and afraid of some humans, but she’s living her best life with her new family.