Two bears and one cougar with serious burn wounds were treated using fish skin by veterinarians from the California Department of Fish and Wildlife.

The Thomas Fire scorched California in December 2017, destroying roughly 281,893 acres (114,078 hectares). It was the most destructive wildfire in California’s modern history.

It just came to an end on January 12, 2018, after destroying over 1,000 structures and forcing 100,000 people to flee their homes. It took at least 15 lives, but people weren’t the only ones who were afflicted; animals were hit far worse.

Two adult bears (one of them was pregnant) and a 5-month-old cougar from the Los Padres National Forest were among the animals killed by the fire.

The bears’ paws were burned to the third degree, and one of them was so seriously hurt that it couldn’t even stand. Rather than using traditional bandages, vets used fish skin as a treatment. 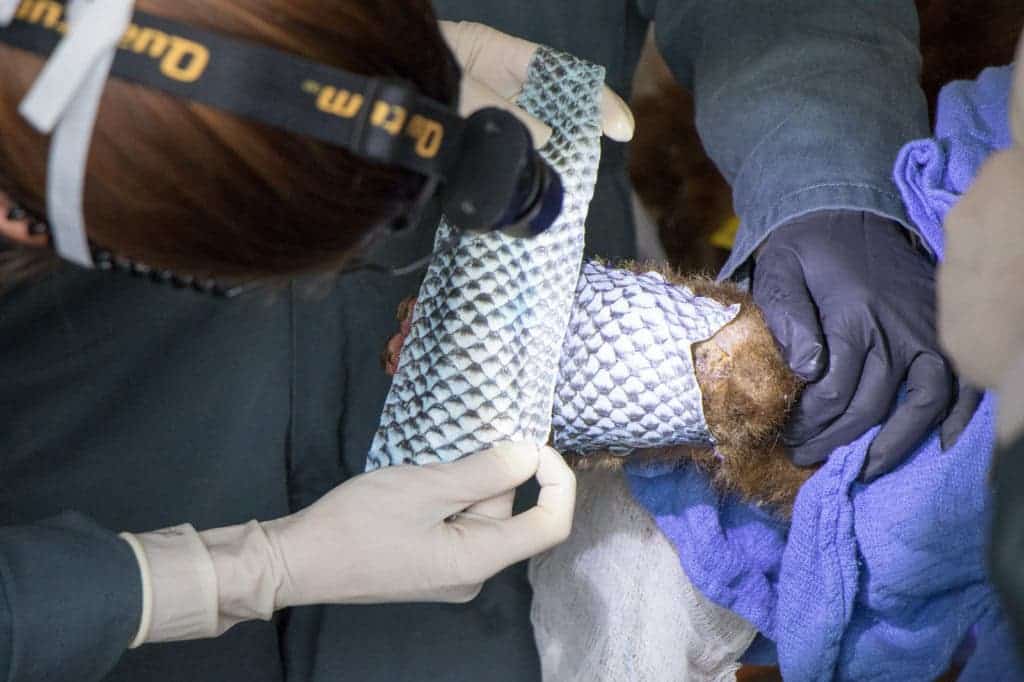 Fish skin (tilapia in particular) has been used to cure burns on people before, as weird as it may appear. Due to a lack of transfer collagen, which is the traditional procedure, Brazilian doctors have utilized fish skin to cure burn patients. The experts went on to say that the skin of tilapia is high in collagen proteins, which aid in skin repair and scarring. The therapy has shown potential and is currently being tested in clinical studies. 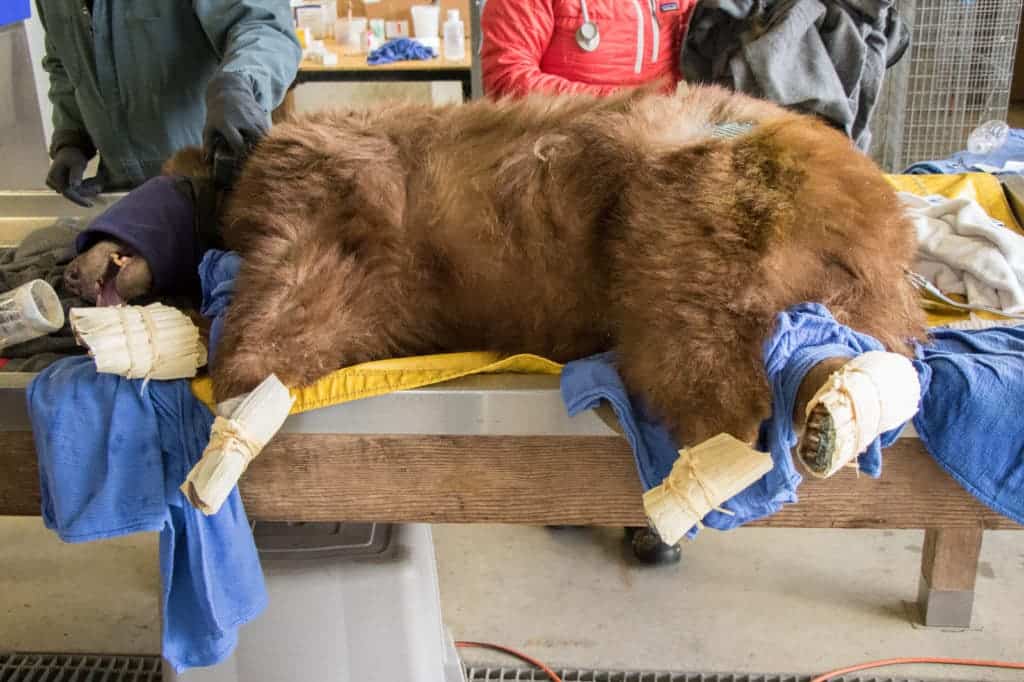 But it wasn’t just a desire to try a new, unconventional treatment; vets selected tilapia skin over bandages for many reasons.

Working with bears and cougars is challenging to begin with, especially when they are injured. They are normally sedated for medical procedures, but the number of times they can be sedated is limited, and bandages must be changed on a regular basis. 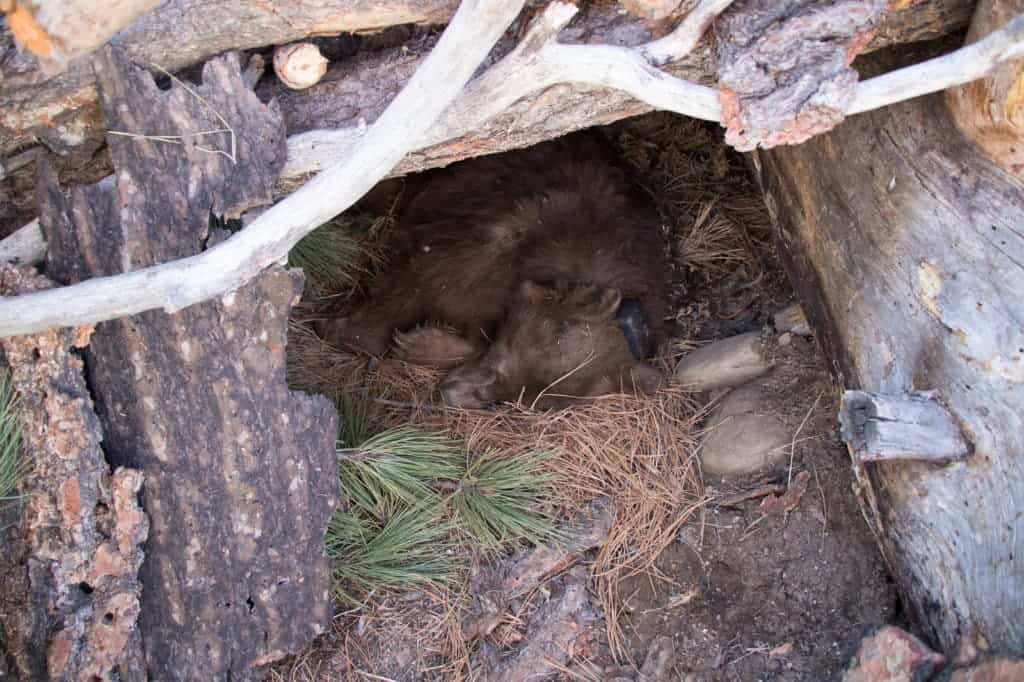 Furthermore, putting drugs in their food is futile since there’s a good chance they won’t eat it. To make matters worse, the bears and cougars would have eaten through their bandages, causing the material to block their stomachs. Bandages would not suffice, the veterinarians understood right away. That’s when they turned to Dr. Jamie Peyton, the Chief of Integrative Medicine at the UC Davis Veterinary Teaching Hospital.

Peyton works with domestic animals most of the time, but he is particularly interested in burns. He devised a method for sterilizing tilapia skin and a homemade burn treatment for the bears’ paws. The procedure has not yet been tested on veterinary patients and has not yet been licensed for use in the United States by the Food and Drug Administration. They didn’t have a lot of other options, though.

Peyton cut pieces of tilapia skin that were precisely the same size as their paws and sutured them over the burns while the bear was under anesthesia to retain the skin on the injuries. Additional temporary wrappings were applied, including rice paper and corn husks, with the goal of extending the time it would take the animal to gnaw down to the fish skin bandage. All of these items are safe for animals to ingest.

“We expected the outside wrapping to fall off eventually,” Peyton explained, “but we hoped the tilapia would retain consistent pressure on the wounds and serve as an artificial skin long enough to hasten healing of the wounds beneath.”

Finally, she employed acupuncture to help the bear manage his discomfort, which is a controversial method. The effectiveness of veterinary acupuncture has yet to be proved, with systematic studies in 2001, 2006, and 2009 all finding inadequate data to support or refute its efficacy. The American Animal Hospital Association (AAHA) and the American Association of Feline Practitioners (AAFP) issued joint guidelines for the management of pain in cats and dogs, citing a “solid and still growing body of evidence for the use of acupuncture for the treatment of pain in veterinary medicine to the extent that it is now an accepted treatment modality for painful animals,” according to the AAFP.

Whether or whether the acupuncture helped, the tilapia bandages seemed to make a significant impact. Because one of the bears was pregnant, an ultrasound indicated that she needed to be released to the wild as soon as possible.

“That was a major changer for us,” Clifford recalled, “because we knew she wouldn’t want to give birth in confinement.” “We weren’t really set up to have a delivery in the lab holding facilities, and we knew there was a good chance she’d reject the cub because of the stress she was under.” We needed to reintroduce her to the wild as soon as possible.”

Thankfully, the mending process was swift enough to allow for their reintroduction into the wild, thanks to the clever bandages. They were relocated to a new environment (as their old one had burned down). The cougar was likewise released to the wild, however it was younger and had lesser burns. The endeavor as a whole was deemed a success.

In the future, this initiative might be much more significant. Wildfires are predicted to grow more common as temperatures continue to climb and dryness becomes more prevalent in California.

Dr. Deana Clifford, acting manager of the Wildlife Investigations Lab in Rancho, who initially treated the bears, stated, “This treatment has the potential to be utilized successfully on all kinds of burn victims, both domestic and wild.”

“It’s been crucial experience for us at the Wildlife Investigations Lab since California’s changing climate means we’re likely to witness more wild creatures damaged by catastrophic wildfires.” We can make the best treatment decisions, shorten animals’ time in confinement, and give direction to other institutions caring for burnt animals by better knowing what resources are needed to care for wounded wildlife and what treatment strategies maximize recovery speed.”